The Bash (formerly The Bojangles Bash) was started in 2013 by a group of dreamers that set out to create an elite level high school basketball showcase that provided a different experience for players, coaches and fans. We’re a showcase! Meaning that EVERY game will be the best match-up of teams from around the nation.

The inaugural Bash saw sell-out crowds, fantastic basketball action, radio DJs, t-shirt guns, more food than you can imagine and much more. You truly had to see to believe!

The first year of the Bash featured a dunk by Hammond’s Seventh Woods that has 84,000 views on YouTube by the end of the weekend. Fans left Ridge View High School ready for year two of the event, and The Bash II didn’t disappoint! 3 of the country’s top 100 players along with numerous schools ranked in their state’s top 10 performed in front of sellout crowds at the 2014 Bash. The atmosphere created by great hoops and DJ iAM was incredible all three nights once again proving the Bojangles’ Bash is an experience unlike any other. 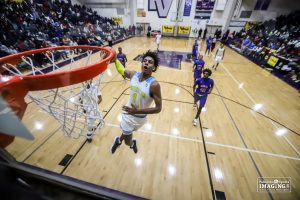 Fast forward to The Bash III and our expectations were exceeded with AMAZING basketball action including 6 of the nation’s Top 100 players, HUGE sellout crowds, and UNBELIEVABLE media exposure.

The 4th edition of The Bash in 2016 was absolutely ELECTRIC!  Yet again we saw sell out crowds and HIGH FLYING basketball action at Ridge View High School.  FOUR of the nation’s top 100 players and THIRTEEN of SC’s top 50 showed our sell-out crowds what we mean by a true National Elite High School Basketball Showcase.

The 2017  Bash was absolutely incredible seeing sell out crowds, high level hoops and our best Bash field ever for the 5th edition of the event.  Once again we had to break basketball fan’s hearts telling them we were sold out.  We can’t stress to fans enough to get tickets early to be a part of the EXPERIENCE that is  The Bash!  The 2017 Bash also saw the first international team at the event in Orangeville Prep from Canada ushering in the new tag line:  The Bash, an INTERNATIONAL Elite High School Basketball Showcase.

The 2018 Bash, held December 6-8, 2018, was a weekend that is hard to describe in words.  The Bash welcomed Oak Hill Academy for the first time in 2018 and what a show it was!  Friday and Saturday nights were SELL OUTS again, and for the first time, we almost sold out Thursday night!  This was evidence that The Bash is an experience unlike any other.  You really have to see it to believe it.

The 2019 Bash, held December 12-14, 2019, was simply incredible.  The Bash welcomed back Oak Hill Academy for the  second year in a row along with perennial powers Huntington Prep, Ridge View, Dorman, Orangeville Prep and more.  If there was ever any doubt that the Bojangles’ Bash was a destination for top basketball teams and for basketball fans, the 2019 Bash left no doubt that EVERYONE wants to be at this incredible international elite high school basketball showcase.

2020 brought about a world of challenges:  a worldwide pandemic, a location change and then a LAST MINUTE location change to the beautiful campus of Columbia International University.  The weekend was about bringing people together in a safe way to enjoy high-level high school basketball, and it was nothing short of magical with teams from around the country banding together for yet another amazing experience.

The 2021 Bash was a step in the right direction of normalcy, even though we still had to limit crowds in the gym.  But even though the crowd may have been smaller, the basketball action and excitement was BIG as we welcomed The Bash back to Ridge View High School.

The list of top players and teams to participate in The Bash is growing each year. Basketball fans everywhere know that there is no better place to catch future greats than at The Bash. The Bash is truly an international elite high school basketball showcase.  It’s a show that you truly have to see to believe.

Be sure to follow us on our all of our social media outlets and get involved in the discussion!

We hope to see you December 15-17, 2022 for The Bash X as we celebrate ten years of elite high school basketball!

Don’t wait, get tickets now to this year’s Bash!
Tickets

Get noticed at all of our events and dates! Get your business out there!
Sponsorship Opportunities